Dear sisters members of Trade Union organizations all over the world

I would like to express my warm greetings from the Land of Egypt and from the Egyptian working woman, I have the pleasure to participate at this virtual meeting which is being held in the framework of the commemoration of the United Nations for the international women’s day.

Today we celebrate the long history of struggle of women all over the world during the past decades in order to get the political, economic and social gains. she fought to respect her personality, for the equal gender, her rights in equality, her rights to get the leadership posts, her rights in adequate working conditions, fair salary, and to protect her from the harassment in the working places.

The new millennium has seen big changes of the opinions and positions  that the women believed in though the idea of equality has been spread. I would like to seize that opportunity to mention that the woman in Egypt is living her best era under the leadership of his Excellency president of the Arab Republic of Egypt Abdelfattah Elsissi who gave the opportunity to the Egyptian woman to be represented at the House of representatives by 40%, in addition to the remarkable appreciation given to the Egyptian woman and her role as main partner at building of the society and its progress. as he sought to the empowerment of the women in a better way and his excellency stressed on the necessity to involve the woman in the the political ,social and trade union fields.The president called upon changment of our culture towards the women. Currently the Egyptian woman has the opportunity to work in all fields, she has been assumed all the posts, she became minister, judge and police officer even she worked in the hard jobs.

We have to highlight the role of Egyptian unionist woman in defending on the rights and benifits of their colleagues. In Egypt the prominent development has been shown during the previous trade union election as a big number of working women have been elected  .In this occasion we have to appreciate and greet the pioneer role of Cde Guebaly El Maraghy president of ETUF who supports the working woman in different initiatives and who allowed us to work as partners and gave us the opportunity to educate avbig number of the working woman.

Despite all this privileges, the woman still faces various challenges, that the capitalists desired to prevent us from all what we have achieved through our struggle during the past decades and wanted to violate our rights especially during the Covid 19 crisis which has affected on the workers living standrads  and increased the rates of unemployment all over the world. The working woman was hit by unemployment, the decrease of wages and reducing of the health services.

We will continue our struggle in ordre to promote our participation at the economic development and for giving us outstanding position in the strategies priorities and development plans to protect the working woman by , creation of job opportunities ,protect her from discrimination , fight violence , sexual harassment ,and we should take care of education , rising skills which promote her opportunities for assuming the leading positions.

We appreciate role of WFTU and all its initiatives aiming at tackling of the problems of working woman and to improve her living conditions. 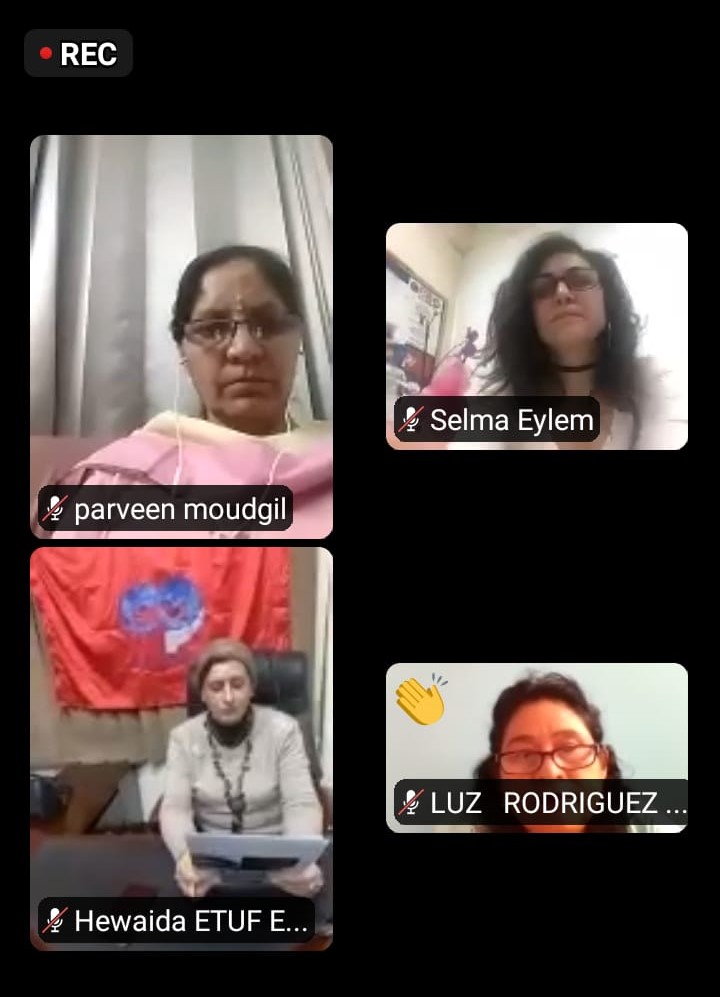 Under the Patronage of his Excellency, the President Abdel Fattah El-Sisi, Egypt Trade Union Federation completed the preparations to host the 43rd session of OATUU